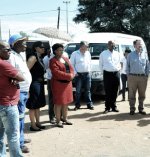 A detailed Business Plan was formulated indicating the objectives, milestones/activities and outcomes. The Business Plan also describes methods to be used in data collection during the Door-to-Door activity that forms a major part of the process. The project was to employ a Project Manager, Coordinator, Supervisor and Volunteers (mainly youths). It was affected by the Olifantshoek protests. The other foreseen threats to the project was the volunteers withdrawing before completion of tasks due offers of employment. Youth agitation with certain processes has been identified as a general threat to development as some tend to incite defiance campaigns that may derail certain GDF programmes. The Hope Programme is best positioned to deal with such challenges as they emerge as they are likely to them up from their surveillance.

The Mapoteng Soup Kitchen (or Tsholofelo Community Health Workers) was opened in October 2012. It is a drop in centre for hunger affected as well as members of the community that may require counselling for various social problems including terminal illnesses and substance abuse.

The Soup Kitchen serves two meals every day to the hunger affected, i.e., breakfast at 9:00am and 1:00pm. The centre employs 8 people. And the facility supports an average of 80 community members per day.

The soup kitchen concept provides an entry point into a conversation with the affected and frequently homeless people who may need counselling to better deal with the causes of their problems. The facility is also used as a community hall for other events including training.