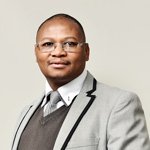 He holds extensive experience in teaching as he has been in the teaching field for the past 27. He started his teaching career in 1987 at Sishen Intermediate mine School (Seshen) as it was called by then, he later became a teacher at Maikaelelo Combined School (Olifantshoek) in 1991. In 2001 he started teaching at Langberg High school (Olifantshoek), and went back to Maikaelelo (Olifantshoek) in 2006, this time it was now a Primary school. He was appointed as the Deputy Principle at Assmang Primary School (Postmasburg) in 2011.

Bodumele has been appointed as GDF’s new Project Manager for Educations and Skills Development, he commenced his duties on 02 May 2014. He is a great lover of sports in general, and mostly enjoy soccer and cricket. He has a certificate in Mini Cricket Coaching which he obtained in 2013 and he also has an Intermediate Soccer Referee Certificate. He is highly involved in community upliftment, he once served in Drought Relieve Forum as a Treasurer, and also served in Phuthadichaba Resource Centre in Olifantshoek where he spends most of his time. Bodumele has been serving in the GDF board since 2007 and was appointed as the Chairperson in 2011.