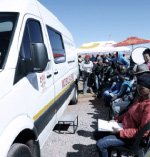 RE A Fola Health Promotion brings health changes in Gamagara

RE A Fola Health Promotion is a service that was launched by Gamagara Development Forum (GDF) in partnership with John Taolo Gaetsewe and the Department of Health on 12 August 2013 in the Gamagara area.

The GDF is committed to building a forum that provides excellent services and investing responsibly in their beneficiary communities which are Deben, Dingleton, Mapoteng/Sesheng and Olifantshoek, hence GDF requested that the RE A Fola Health promotion be extended to Gamagara Local Municipality as this project is an initiative of JTG-DT. The project has been existing in Gasegonyana Local Municipality and Joe Morolong Local Municipality since 2012.

Five visits of the RE A Fola Health Promotion out of 10 have been conducted in the Gamagara areas. The RE A Fola Health Promotion Mobile clinics has visited all of the four Gamagara villages which are Dingleton, Mapoteng, Deben, Olifantshoek, and currently Dingleton was once more. The turnout has been great as a lot of the community members have been supporting the Health promotion by coming out in numbers to inquire and acquire about their health status.

The targeted community attendance for RE A Fola Health Promotion in each area is 300 people who have to attend the workshops then the community members in need of the services receive them. In all the areas the target was exceeded and so far 1140 people have received the RE A Fola Health services in the Gamagara Local Municipality.

The services have been including ophthalmic screening where the community members have their eyes screened and they are awarded spectacle in order of priority or they get referred to the hospital for operation, cervical screening, dental screening inclusive of decayed tooth extractions, cholesterol, glucose and hypertension screening health promotion workshops, , and VCT (voluntary counselling and testing). The visit have also been including health promotion workshop where HIV/AIDS, TB, Diabetes,

Hypertension, various cancers and healthy lifestyle were discussed and promoted with interactive sessions, and learning material were distributed.

The next visits for RE A FOLA Promotional Health will be on 20 November at Mapoteng/Sishen followed by a visit at Deben on the 21 November 2013, the last visit of the year will be on the 06 December the area still has to be confirmed.